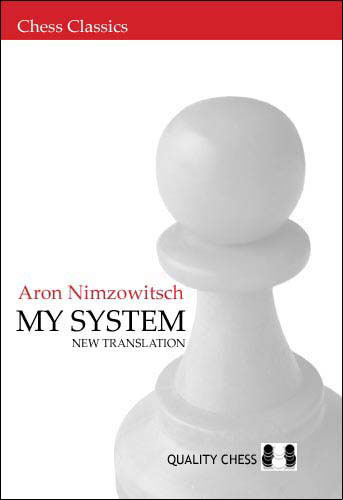 SKU:
€27.99
21.99 27.99 €21.99 - €27.99
Niet beschikbaar
per artikel
Aan winkelwagen toevoegen
Aron Nimzowitsch was one of the greatest chess players of the 1920s and 1930s, ranked just behind the famous World Champions Alekhine and Capablanca. His reputation as an author is higher still.

My System is at the top of a very short list of chess classics. Nimzowitsch's ideas have had a profound influence on modern chess thinking. Most chess masters will at some point have studied Nimzowitsch's work, and not to have read My System is by many regarded as a shocking gap in a chess player's education.

The problem for an English-speaking audience has been that My System was written in German more than eighty years ago. The commonly-used contemporary translations have sounded dated for some time, and were always questionable: the translators frequently toned down many passages, fearing Nimzowitsch's biting wit would be too controversial.

This edition uses a brand-new translation that recreates the author's original intentions. For the first time an English-speaking audience can appreciate the true nature of a famous chess book.

I The Elements
015 Introduction
1 The centre and development
017 1 By development we mean the strategic march of the troops towards the border
017 2 A pawn move must not be considered in itself to be a developing move, but rather simply a move which helps development
019 3 A lead in development is an ideal
020 4 Exchanging followed by a gain of tempo
021 A possible intermezzo between exchanging and gaining a tempo
021 5 Liquidation followed by development or a bid for freedom
024 6 The centre and its urge to demobilise
026 6a Surrendering the centre
028 7 Pawn grabbing in the opening
030 7a Take any central pawn if it can be done without too great a danger!

2 The open file
031 1 Introduction * General comments and definition
032 2 How open files occur (or are born)
033 3 The ideal (purpose) behind all operations on a file
034 4 Possible obstacles to operations down a file
037 5 "Restricted" advance on a file in order give it up in favour of another file, or the indirect exploitation of a file - The file as a springboard
038 6 The outpost
042 Schematic illustration of the open file

6 The elements of endgame strategy
109 Introduction and general comments - The typical disproportion
109 1 Centralisation
112 Shelters and bridge building
113 2 The aggressively posted rook as a typical endgame advantage
116 3 Welding together isolated troops and "General advance!"
117 4 The "materialisation" of the abstract concepts: file or rank
119 Schematic illustration of the "endgame" or "the 4 elements"

7 The pinned piece
125 1 Introduction and general remarks
126 2 The concept of the completely or partially pinned piece
128 The exchanging combination on the pinning square
130 3 The problem of unpinning
a) Challenging
133 b) Ignoring the threat or allowing our pawns to be broken up
133 c) The reserves rush up to unpin in a peaceful way
134 d) Tacking (manoeuvring) and keeping open the options a, b, c!
135 Games involving pins
141 Schematic representation to illustrate pinning

8 Discovered check
143 1 The degree of relationship between the "pin" and the "discovered check" is defined more closely - Where is the best place for the piece which is discovering the check?
144 2 The treadmill (windmill)
145 3 Double check

9 The pawn chain
1 General remarks and definitions - The base of the pawn chain
149 The idea of two separate battlefields
149 The idea of building a chain
150 Towards the kingside
150 Towards the centre
151 2 Attacking the pawn chain
153 3 Attacking the base as a strategic necessity
154 4 Transferring the rules of blockading to the pawn chain
156 5 The concept of a surprise attack compared to that of positional warfare, as applied to chains - The attacker at the parting of the ways!
158 5a The positional struggle, or put simply the slow siege of the unprotected base
161 6 Transferring the attack
164 Schematic representation of pawn chains
165 Games to illustrate pawn chains
II Positional Play
1 Prophylaxis and the centre
177 1 The reciprocal links between the treatment of the elements on one hand and positional play on the other
1772 Offences against sound positional play, which should be weeded out in every case as a sine qua non to the study of positional play
179 3 My novel conception of positional play as such
183 4 Next to prophylaxis, the idea of the "general mobility" of the pawn mass constitutes one of the main pillars of my teachings on positional play
184 5 The centre
189 6 What should be the leitmotiv behind true strategy
191 7 Giving up the centre
192 The "surrender of the centre" - a prejudice
200 Roads to the mastering of positional play (schematic representation of chapter 1)
2 Doubled pawns and restraint
201 1 The affinity between "doubled pawns" and "restraint"
203 1a The only true strength of doubled pawns
203 2 A review of the best-known doubled pawn structures
209 The doubled pawn complex in diagram 391 as an instrument of attack 211 3 Restraint - "Mysterious rook moves"
216 4 Clarification of the nucleus of a manoeuvre designed to restrain a pawn majority
216 5 The different forms of restraint are more clearly explained
217 a) The mobile central pawn
218 b) The struggle against a qualitative majority
219 c) Restraining doubled pawn complexes
220 d) My own special variation and its restraining tendencies
3 The isolated queen's pawn and its descendants
229 a) The isolated queen's pawn
230 1 The dynamic strength of the d4-pawn
230 2 The isolani as an endgame weakness
231 3 The isolani as an instrument of attack in the middlegame
232 4 Which cases are favourable to White and which to Black?
232 5 A few more words about the creation of a related weakness among White's queenside pawns
233 b) The "isolated pawn pair"
234 c) Hanging pawns
235 From the "isolani" to "hanging pawns"
238 d) The bishops
239 1 Horrwitz bishops
240 2 A pawn mass directed by bishops
241 3 Cramping the knights while at the same time fighting against a pawn majority
242 4 The two bishops in the endgame
4 Overprotection and weak pawns
247 How to systematically overprotect your own strong points and how to try to get rid of weak pawns or squares
249 a) Overprotection of the central squares
251 b) Overprotection of the centre as a protective measure for your own kingside
252 How to get rid of weak pawns
5Manoeuvring
255 1 What are the logical elements on which manoeuvring against a weakness is based?
The concept of the "pivot", around which manoeuvring takes place.
255 2 The terrain - The rule for manoeuvring * Changing place
256 a) A pawn weakness, which is attacked in turn from the (7 th) rank and from the file
256 b) Two pawn weaknesses, in this case c3 and h3
257 c) The king as a weakness
258 3 Combining play on both wings, when for the moment the weaknesses either do not exist or are hidden
260 4 Manoeuvring when circumstances become difficult (your own centre is in need of protection)
Postscript: The history of the revolution in chess from 1911-1914
269 1 The general situation before 1911
270 Does "The modern game of chess" by Dr Tarrasch really correspond to the modern conception of the game?
276 2 The revolutionary ideas
277 3 Revolutionary theory put into revolutionary praxis
279 4 Other historical battles
282 5 Extension and development of the revolution in chess in the years 1914 to 1926
285 The chess career of Aaron Nimzowitsch
300 Index of players
303My System in the computer age (or footnotes)
313 Nimzowitsch for the 21 th Century