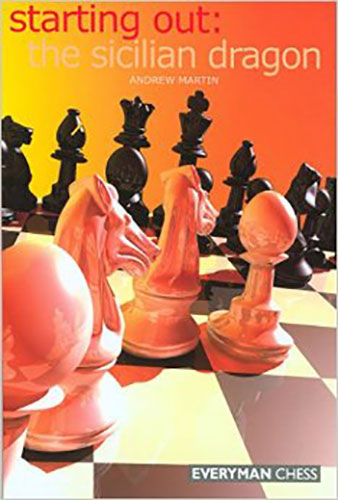 Starting Out: The Sicilian Dragon

SKU:
€18.00
€18.00
Unavailable
per item
Add to Cart
Few would disagree that the Sicilian Dragon is one of the most exciting, high profile and controversial openings in chess history. Right from the very beginning of the game Black chooses to unbalance the position, thus maximising his or her chances of playing for a win. The positions reached are dynamic and of a highly tactical nature, with both players very often going straight for each other's throats in search of a quick-fire knockout blow. In these razor-sharp encounters, it goes without saying that one slip by either side can prove to be fatal. Because of its aggressive nature, the Sicilian Dragon is very popular at all levels of chess, while it received an ultimate seal of approval when Garry Kasparov used it as his main weapon to beat Vishy Anand in a World Championship match.

In Starting Out: The Sicilian Dragon Andrew Martin studies this famous opening in a simplistic way, introducing the crucial initial moves and ideas and taking care to explain the reasoning behind them, something that has sometimes been neglected or taken for granted. As with previous works in the popular Everyman Chess Starting Out series, the reader is helped throughout with a plethora of notes, tips and warnings highlighting the vital characteristics of the Sicilian Dragon and of opening play in general.