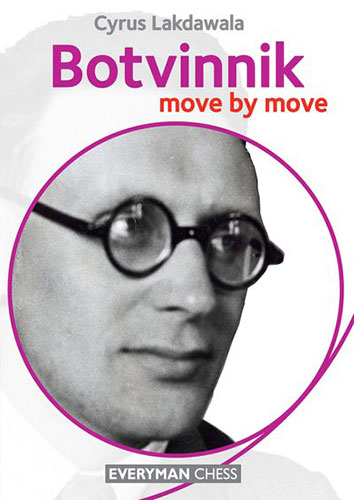 SKU:
€24.00
€24.00
Unavailable
per item
Add to Cart
Mikhail Botvinnik was a three-time World Chess Champion and is widely regarded as one of the World's greatest ever players. Botvinnik possessed a universal, all-round style with an emphasis on logic and strategy. He loved to attack but, in contrast to - for example - Mikhail Tal, his attacks did not appear out of nowhere. They were the result of a systematic build up and developed naturally from earlier strategic gains. Botvinnik’s games include numerous instructive masterpieces and a methodical analysis of his games is essential for any aspiring chess player.
In this book, former American Open Champion Cyrus Lakdawala invites you to join him in a study of his favourite Botvinnik games. Lakdawala examines Botvinnik's renowned skills in the key areas of attack and defence, initiative, exploiting imbalances, accumulating advantages and endgame play. He demonstrates clearly how we can all improve by learning from Botvinnik's play.
Move by Move provides an ideal platform to study chess. By continually challenging the reader to answer probing questions throughout the book, the Move by Move format greatly encourages the learning and practising of vital skills just as much as the traditional assimilation of knowledge. Carefully selected questions and answers are designed to keep you actively involved and allow you to monitor your progress as you learn. This is an excellent way to improve your chess skills and knowledge.