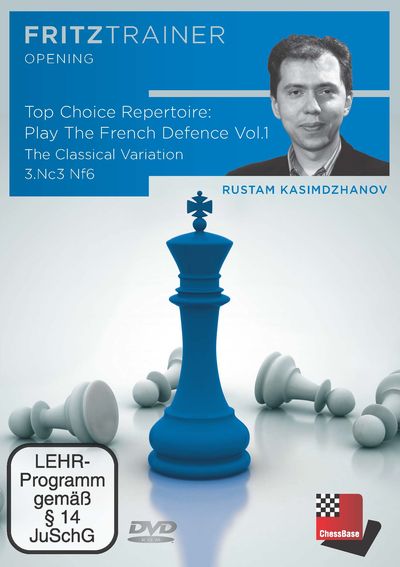 The French Defence is one of the most popular openings - from club player to grandmaster. It’s a very solid opening against 1.e4 but leaves room for counterplay and initiative. In this two-volume video course former world-champion and startrainer Rustam Kasimdzhanov shows you the ins and outs of this hugely complex opening. Through his vast experience both as a player, as well as the second of Vishy Anand and Fabiano Caruana; Kasimdzhanov has created a full lifetime repertoire after 1.e4 e6 for you. Start your journey now!
​
​Rustam Kasimdzhanov. Born in 1979, the grandmaster from Uzbekistan has for many years been known as a very strong and imaginative player. However in 2004 Rustam Kasimdzhanov (pronounced “Kah-zeem-jha-nov”) shocked the chess world by winning the FIDE world chess championship title, beating a string of world-class players like Ivanchuk, Grischuk, Topalov and Adams in the process. Kasimdzhanov is a very deep player, who is able to explain chess ideas in an eloquent, lucid style, with a fine touch of humour. His lessons are both entertaining and instructive – perfect for students who seek to avoid “dry” theory. Kazimdzhanov was a second to Vishy Anand in three world championship matches and has been the second and trainer of Fabiano Caruana until recently.