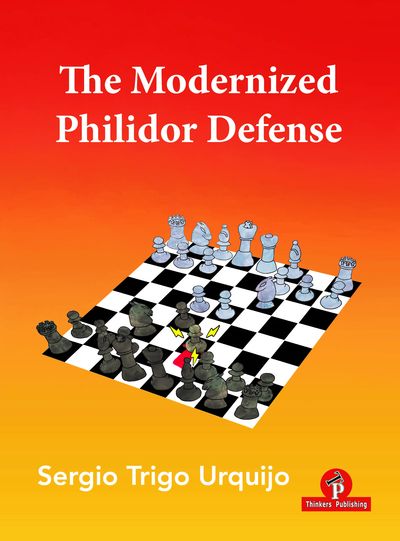 SKU:
€32.00
€32.00
Niet beschikbaar
per artikel
Aan winkelwagen toevoegen
But Inigo, how can this be good for Black? It was the first thing I asked my good friend and FIDE Master Inigo Martin Alvarez after he taught me the queen exchange line (1.e4 d6 2.d4 Nf6 3.Nc3 e5 4.dxe5 dxe5 5.Qxd8+ Kxd8) of the Philidor
Defense. I confess I couldn't believe it. He also insisted that against 6.Bc4, the best response was 6...Be6, allowing pawns to be doubled! I could not get over my astonishment – a variation in which Black quickly surrendered the possibility of castling and voluntarily doubled (and isolated) pawns in the center!

I naively thought that the best way to prove to my friend how wrong he was, was to play against him in that position and to beat him – but I couldn't. There was no way to break that pawn structure. So, as the popular saying goes: "If you can't beat your enemy, join him!"
Since the time when he taught me this defense, at an under-12 Spanish Championship, I have not stopped playing it. It has always been part of my opening repertoire, even becoming my main weapon for much of my life, with great results. But it is one thing to play it and quite another to write a book about it. Me writing a book? Even though the idea has been in my head for quite some years, I have to say that I didn't think I would be able to do it until Grandmaster Romain Edouard offered me the opportunity – I couldn't refuse it, although it would be quite a challenge for me.

I had the advantage that there were not many specific books on the market about this defense which, on the one hand, made my task easier; on the other hand, this placed a considerable responsibility upon me to write a book that could become the main authoritative reference on the Philidor Defense.

The biggest challenge has been to fight against the engines that, at first glance, don't credit this defense with the value it deserves. This is because the engines significantly value the space that White usually has against the Philidor, but there is one aspect that neither Leela Zero nor Stockfish nor any of the other engines take into account – and that is the counterattack!
The aim of this book is to provide the reader not only with a complete repertoire for the Philidor Defense, but especially a repertoire that begins from the very first  move – because White has mechanisms at their disposal to avoid entering into the vast labyrinth that they often perceive when meeting this opening. Why do I say labyrinth? Because Black can come up with different move orders that make White dizzy – and the curious thing is that almost all of these ways are acceptable and have good statistics in practical chess. For example, Black may decide to play with ...c6 and ...a5, with ...c6 and ...b6, with ...c6 and ...Qc7, or with ...a6 and ...b6 (which I recommend) etc. In short, I think Black has several schemes, and each one is not very difficult to learn because they have many lines in common. My goal, as I mentioned before, is to write a book that will become the main reference on this defense and one that will be of help to all types of players, from club players to Grandmasters. For this reason, it was my wish (and I hope I have succeeded) to create a very elaborate repertoire with the firm intention that any player will be able to face an opponent of a higher level, without fear and with clear ideas.
I have tried to include new moves and new ideas against practically all of White's weapons and I have aimed to be as exhaustive as possible, so that I can accompany the explanation of the ideas with concrete moves, to make them easier for the reader to understand.
Clearly 1...d6 and the Philidor Defense in particular, is far from being the refutation of 1.e4 but I have always tried to look for options for Black that are active in order to equalize or to achieve very real counterplay.

Furthermore, the advantage of studying this book and playing this defense with Black is that the chances of White finding new ideas are much lower than in other main openings – such as some very critical lines of the Sicilian, for example, where we constantly see new moves and schemes that quickly land Black in trouble. Having said all this, I encourage you to discover (if you haven't already done so) this great defense. I hope you enjoy the book and that it will be very useful for your games and hopefully, you will gain many points with the Philidor.

Sergio Trigo Urquijo
Portugalete, January 2021
Sergio Trigo Urquijo was born in the Basque Country (Spain) on 11 august 1989. He learned to play chess at age of six. As a junior he won from u-12 to u-18 Basque Country Championships. He has been a member as a player and captain of Sestao Chess Club winning the national Team Championship in 2012, 2013, 2016, 2017 and 2018, as 9 times Basque Country Team Champion. He won the silver medal in the Portugal Club Cup in 2015. He has played in the European Club Cup in 2014. He has helped many grandmasters as a second in many tournaments.