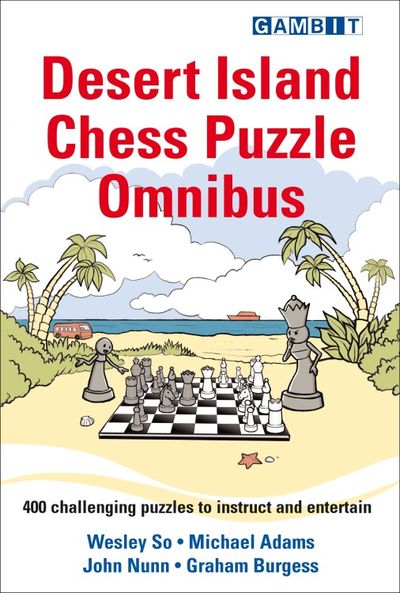 SKU:
€23.00
€18.00
€18.00
Niet beschikbaar
per artikel
5 beschikbaar
Aan winkelwagen toevoegen
​If you had to choose a single luxury chess item to take to a desert island, then how about this – a superb selection of 400 puzzles to solve? Each author has carefully chosen 100 original positions, graded by difficulty and theme into four sections of 25. The emphasis throughout is on entertainment, instruction and inspiration. The solutions pinpoint lessons to be learnt and explain why plausible but incorrect solutions fail.
​
This book is written by an all-star team of authors. Wesley So is the reigning Fischer Random World Champion, the 2017 US Champion and the winner of the 2016 Grand Chess Tour. Michael Adams has been the top British player for the last quarter of a century and was a finalist in the 2004 FIDE World Championship. John Nunn is a three-time winner of both the World Solving Championship and the British Chess Federation Book of the Year Award. Graham Burgess is Gambit’s Editorial Director and the author of 30 books.