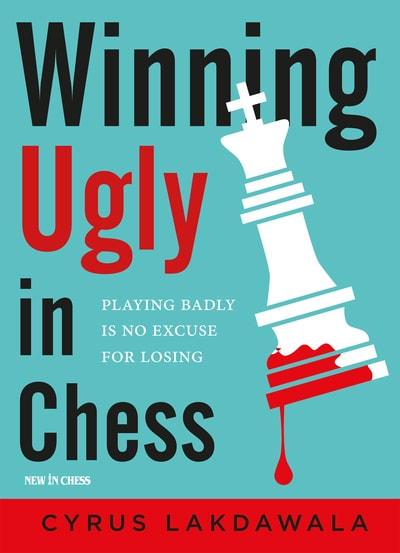 SKU:
€22.95
€22.95
Niet beschikbaar
per artikel
Aan winkelwagen toevoegen
When was the last time you won a perfect game? A game that wasn’t tainted by inferior moves?
Every chess player knows that smooth wins are the exception, that play is often chaotic and positions are frequently irrational. The road to victory is generally full of bumps and misadventures. Welcome to the world of imperfection!
Chess books usually feature superbly played games. In Winning Ugly in Chess you will see games where weird moves are rewarded. Cyrus Lakdawala knows that playing good chess is all very well, but that beating your opponent is better. He demonstrates the fine art of winning undeserved victories by: and other ways to land on your feet after a roller-coaster ride.
Lakdawala shows how you can make sure that it is your opponent, not you, who makes the last blunder. If you’d rather win a bad game than lose a good one, then this your ideal guide. The next time ‘the wrong player’ wins, you will be that player!
Cyrus Lakdawala is an International Master and a former American Open Champion. He has been teaching chess for four decades and is a prolific and widely read author. His Chess for Hawks won the Best Instructional Book Award of the Chess Journalists of America (CJA). Other much acclaimed books are How Ulf Beats Black and Clinch It! How to Convert an Advantage into a Win .

Content
​006 Explanation of symbols
007 Introduction
013 Chapter 1 Missed appointments: how can we escape the Law’s reach?
083 Chapter 2 I’m not a therapist, so I can’t comment: how to fluster your opponent with an opening surprise
124 Chapter 3 Vertigo: how do we grasp the ungraspable?
187 Chapter 4 How to squeeze something from nothing
227 Chapter 5 Rise of the Machines
250 Chapter 6 When bunnies attack
260 Chapter 7 Combustion: why do we play so inspirationally against certain opponents?
286 Chapter 8 Epics
309 Chapter 9 The lunge: when should we go for it and when should we hold back?
323 Chapter 10 The King
334 Index of players
336 Index of openings