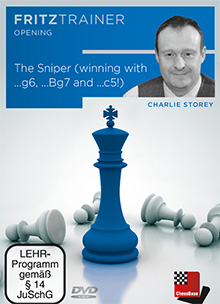 SKU:
€29.90
€29.90
Niet beschikbaar
per artikel
Aan winkelwagen toevoegen
The Sniper – officially created in 2010 - has now been tested with success against top grandmasters and computer programs and still manages to ensure new and creative opening situations full of imbalance - and hence winning prospects for Black. DVD author Charlie Storey has used the Sniper, in conjunction with deep computer analysis, to help gain 145 UK Open victories and has seen his students employ it successfully in European Youth Championships.
The Sniper is a universal opening framework which can be played against all main first white moves - 1.e4, 1.d4, 1.c4, 1.f4 and 1.Nf3. It is defined by: 1 (Any White move) …g6 – 2 (Any White move) …Bg7 – 3 (Any White move) …c5 In other words, Black plays 1…g6, 2…Bg7 and 3…c5 against practically anything! And where White prevents this deliberately, good suggestions are given for these ‘Anti – Sniper ’ variations to blow them away. The major benefit to any Sniper practitioner is that they build up a familiarity with the pawn structure in the resulting middle games which helps to prevent errors and saves time in practical play. Start your Sniper training as your first or secondary repertoire – and remember you can also play it as White!
​