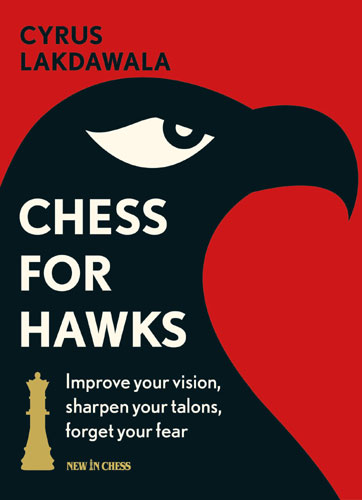 SKU:
€22.95
€22.95
Niet beschikbaar
per artikel
Aan winkelwagen toevoegen
Are you a dove or a hawk? Is your natural instinct at the chessboard for caution and strategy or do you crave adventure and confrontation? This question may be more important than you think because being aware of your personal style (and that of your opponent) is essential in your development as a chess player.

As an 8-year-old boy, Cyrus Lakdawala realized to his horror that he was a dove when his chess teacher reprimanded him for playing an unnecessary defensive move instead of banging out a better and more aggressive one that was not so difficult to find. Since then, Lakdawala has devoted an important part of his efforts as a player to trying to resist his natural tendency to over-solidify positions and avoid complications.

Chess for Hawks is the fascinating and often hilarious story of Lakdawala’s struggle to release his inner hawk. It is also a highly instructional guide that will make you think about questions you may not have thought about before:


Cyrus Lakdawala does something no other chess writer has done before: he makes you reflect deeply about your style of play and its consequences.

After reading Chess for Hawks you will be a stronger player because you have mastered an essential but neglected skill: you will know how to obey the position’s requirements instead of your natural inclination.

Cyrus Lakdawala is an International Master, a former National Open and American Open Champion, and a six-time State Champion. He has been teaching chess for four decades, and coaches some of the top junior players in the US. Lakdawala is a prolific and widely read author. This is his first book with New In Chess.

013 Chapter 1 Oh Lord, won’t you buy me a Mercedes Benz?
023 Chapter 2 Low expectations come with a high price tag
033 Chapter 3 Obey the position’s requirements, not your inclination
042 Chapter 4 When should we weaken our structure in exchange for attack or initiative?
051 Chapter 5 Petrosian: the Yin Master
062 Chapter 6 ... the sincerest form of flattery
073 Chapter 7 The God of War
081 Chapter 8 That way madness lies
090 Chapter 9 When to fight and when to bail out with a draw offer?
097 Chapter 10 Do unto others as you would have them do unto you
105 Chapter 11 Single color based attacks
113 Chapter 12 How to survive the gifted kid
122 Chapter 13 Surviving opening ambushes
131 Chapter 14 Minor pieces in relation to structure
148 Chapter 15 Bishop domination
166 Chapter 16 Opposite-colored bishops
177 Chapter 17 The final frontier
198 Chapter 18 Major-piece endings
207 Chapter 19 Revolt of the proletariat
216 Chapter 20 Defense
234 Chapter 21 Attack and initiative
261 Chapter 22 The lab rats search the maze for the cheese
271 Chapter 23 Before and after