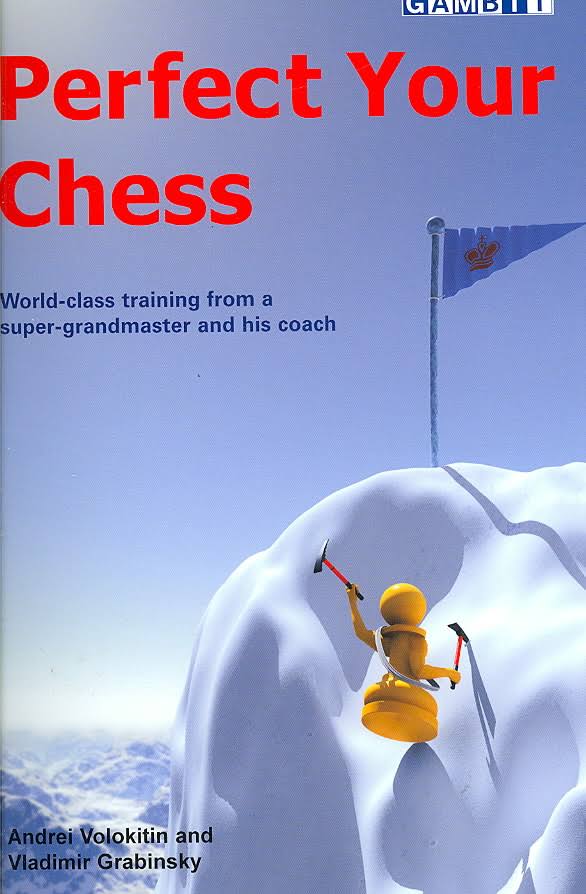 SKU:
€22.00
€22.00
Niet beschikbaar
per artikel
1 beschikbaar
Aan winkelwagen toevoegen
Andrei Volokitin is one of a rare breed of players: he achieved a ranking in the world's top 20 while still a teenager, playing dynamic and often brilliant chess. Although we cannot all aspire to emulate his achievements, there is much that we can learn from his training methods, his games and his general approach to chess. These topics are the subject of this book, written in collaboration with his trainer.

The core material of the book is 375 positions where the reader is given a task or asked a question. These tasks resemble those that players regularly face over the board, and are especially useful from a training viewpoint. Sometimes we are told we need to find a combination, but often the task is simply to decide on a move. It is for us to determine whether to play quietly or stake everything on a sacrificial attack!

The examples are all from recent years, and so even the most zealous reader of chess literature will have seen few of them previously. Many of the positions are from Volokitin's own games, so we get the 'inside story' on some truly spectacular chess. We are also presented with fine examples from Grabinsky's training files, carefully collected and graded over the years for their instructive merit. The commentaries and detailed solutions explain the key issues in each position, and also convey the authors' philosophy of chess and their love for the game.

Grandmaster Andrei Volokitin was born in 1986 in Lvov. In 2004, he won the Ukrainian Championship and was a member of the team that won the Chess Olympiad in Calvia. In the January 2005 rating list he was, at age 18, placed in the world's top 20 for the first time. He has won many prizes in junior championships and major international events.
International Master Vladimir Grabinsk y is the coach of the Ukrainian youth team. In addition to Volokitin, his pupils include several other players who have achieved international titles at an early age.

Introduction
Successful people are the result of hard work, more than talent.

Democritus
It is easy to explain the popularity of chess. The game is simple to learn, it is interesting, and after one's first victories, one can easily get the illusion that with a small effort, there is no reason why one should not become world champion. All of us as children feel this is really possible, but we just don't quite know exactly how. So, we look for a good trainer, who can reveal the main secrets, and then all will be well... But in fact, the most important element on the path to improvement is not to be found in other places, but in the player himself!
It is interesting to compare chess with other forms of sport. Looking at the difference between soccer, skating, boxing and chess, one immediately realizes that any sportsman sets himself the task of improving his results to the maximum, and overtaking his rivals. The methods of training for this are similar in each sport. A soccer player spends the majority of his training time running and practising ball skills, the weightlifter works with weights, etc. In other words, each works on those qualities which will enable him to achieve success.
Now let us consider how a chess-player trains, and on what he spends the majority of his time: seeking an advantage in a certain modern opening variation, reading books by author A, and the an­notations of author B, and studying thousands of recent games on the Internet, looking for an inter­esting new idea. Later on, during a tournament, when he employs his novelty and outplays his opponent, only to miss a forced win, or fall into some kind of trap, he regards this as just bad luck. Unfortunately, many chess-players completely overlook the need to work regularly on the develop­ment of their main 'tool', i.e. their brain. We are not denying the value of studying opening theory or recent games, but we suggest that one must think more carefully about the relative importance of these and other factors, and the correct allocation of one's time to such essential things as develop­ing combinative vision, calculation of variations, and the development of one's imagination.

Now we shall discuss how one can make self-improvement work in chess both interesting and effective. As many years of experience have shown, even the most intelligent lectures, delivered by the most articulate and talented of teachers, have very little effect, because they are soon forgotten. Therefore, as the second world champion, Emanuel Lasker (incidentally, a highly intelligent and erudite individual) put it, "Memory is too precious a commodity to be stocked with trifles. Out of my 68 years, I have devoted at least 40 to forgetting much of what I had heard or read, and since do­ing so, have acquired a certain ease, which I should never again wish to be without." Now we can understand that what helped him remain world champion for 27 years was his quick-wittedness and freedom from any dogma. Exceptions are more important than rules. Rather than just playing over a collection of games, it is much more effective to try to guess the moves. Rather than listening to a lecture by a well-known player, demonstrating a game, it is much better first to analyse the game oneself and then compare one's own conclusions with those of the master.

Therefore, in this book, we shall not try to teach you how to play better chess. Rather, we shall do something more valuable: we shall give you material, which will help to develop your think­ing. Of course, we should admit that we did not think up this method ourselves. Grandmaster Adrian Mikhalchishin considers "Just as a pianist practices finger-exercises every day, so every day, a chess-player should train his tactical vision." The renowned trainer Mark Dvoretsky, in his books, always follows a lecture with a series of training exercises on the theme concerned. The book by Hort and Jansa, The Best Move, contains many interesting positions with which you can test your strength. But, although we have studied their book, we plan to do things a little differ­ently here.

The book is divided into three parts:

1) Make a Move (positions where one must find the best move). This section is concerned with developing intuition and imagination in chess.

2) Find the Win (positions in which one must find a forcing variation, leading to a win). The examples are designed to test combinative vision and the calculation of variations.

3) Answer a Question (the reader's task here is to find the answer to a concrete problem). Solving these examples will develop one's positional understanding and logic.


Undoubtedly, it is essential to understand that these things are all intermingled in a game, and we have not tried to separate out tactics and strategy.

Each section opens with 23 examples taken from Volokitin's games. We hope that looking at these will give you great aesthetic pleasure, as well as being instructive. If you are confident in yourself, try to solve these on your own. That will be even more useful. Then there follow 100 ex­amples in each section, taken from the games of other grandmasters and masters, played since the year 2000, i.e. absolutely fresh examples. They are given in order of increasing difficulty. The first 40 are aimed at the level of a FIDE Master, the next 40 at IM level, and the final 20, at GM level. Naturally, we realize that most of our readers will be somewhat below these levels. This does not mean that this book is not for them - far from it. What it does mean, is that club players should not be discouraged if they find the examples difficult, or often fail to uncover all the points mentioned in the solutions. The work involved in tackling these positions and comparing your answers with the solutions and the choices made by the players should be of great benefit in any case. And also, there is nothing to stop you setting up the position on a board and studying it at your leisure - you should not feel obliged to recreate tournament conditions and time restrictions.
​
Of course, such a gradation is somewhat subjective in any case. The easier examples can be solved quickly for players in our 'target categories', whilst with the tougher ones, you can analyse them by moving the pieces round if they are too difficult to do in your head. The important factor here is your own effort and the training benefit that you derive. There is no scoring system in this book - the points we would like you to score are in your future chess tournaments! We would ad­vise only solving 5-6 positions each day. The important thing is not trying to set records for solving all the positions in the least time, but to develop one's abilities gradually and systematically.
The success of this method depends in large measure on the thoroughness with which the exam­ples are selected. We have endeavoured to select only the gold-dust from amongst the gravel. This means positions which are original, have relatively short solutions, quiet moves, zwischenzugs, en­emy counterplay, etc. All examples have to be both correct and have only one solution.
And now it is time to empty your head of all you have read before, and mobilize all of your will, to solve the examples we have presented. We wish you good luck!