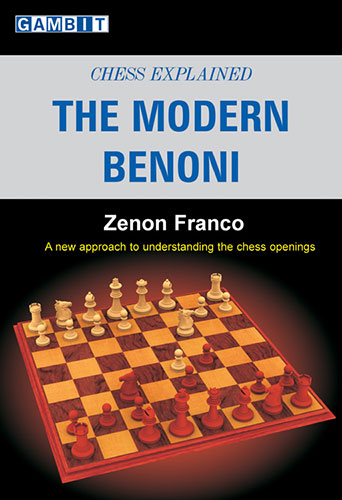 SKU:
€17.00
€17.00
Unavailable
per item
Add to Cart
Chess Explained is a new series of books about chess openings. They are not theoretical works in the traditional sense, but more a series of lessons from a chess expert with extensive over-the-board experience with an opening. You will gain an understanding of the opening and the middlegames to which it leads, enabling you to find the right moves and plans in your own games. It is as if you were sitting at the board with a chess coach answering your questions about the plans for both sides, the ideas behind particular moves, and what specific knowledge you need to have.

The Modern Benoni is a perennial favourite among players looking to create winning chances with Black. It is one of the few openings where White has no easy way to force drawish simplifications or deny Black any dynamic counterplay. Both players need to understand the imbalances in the position and pursue their plans with great vigour. In this book Franco shows how Black can seek to create the kind of mayhem that has attracted champions such as Tal, Kasparov and Topalov to the Benoni, and also demonstrates how White can seek either to put a positional clamp on the game, or else to storm the Black's position before his development is complete. A special section deals with the vital question of move-orders.

Zenon Franco is a grandmaster from Paraguay who now lives in Spain. For more than a quarter of a century, he has written a popular column for Spanish-language chess magazines. He is an experienced chess trainer, his most notable pupil being Paco Vallejo, now one of the world's top grandmasters, whom he taught from 1995 to 1999.