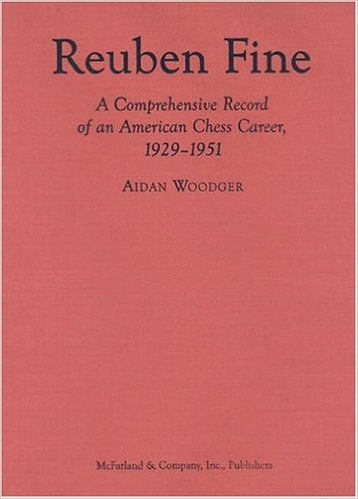 SKU:
€65.00
€65.00
Niet beschikbaar
per artikel
Aan winkelwagen toevoegen
From the time I first started to study chess seriously, at the relatively late age of eighteen (this was about 1980), my favoured method of study has been playing over the games of the great masters, preferably with notes provided by the players themselves. For several years Reuben Fine's collection of his own games was an almost constant companion as I moved from place to place working for different employers on archaeological sites around England. Naturally at that time I knew many of his games by heart— Fine's collection Lessons from My Games: A Passion for Chesscontained only about 45 of his tournament or match games in its 50 chapters.

Over the years 1 bought more of his books and sought out games from tournament books to supplement the small selection available in his autobiography. Judging by the Tournament and Match Record that Fine provided on pages xxi and xxii of the autobiography, I estimated that there were fewer than 500 games to be collected in total. This turned out to be a considerable underestimate, partly because Fine did not even include all of the tournaments he won in this list. Fortunately, Fine had donated a collection of his notebooks to the Library of Congress, copies of which I obtained from Dale A. Brandreth. These notebooks provided a rich source of games for the period 1931-1941. Sadly it soon became apparent that the collection of notebooks was incomplete (though everything donated by Fine to the library was still available). Nevertheless, with the help of other researchers, it has been possible to compile a collection of 659 tournament and match games (plus one exhibition game and one practice game), four fragments from tournament or match games, 28 rapid transit games from U.S. Lightning championship tournaments, 34 correspondence chess games (including nine fragments) and something over 120 miscellaneous exhibition, clock simultaneous exhibition, blitz and consultation games. All of these amount to substantially more than the 242 games available in, for example, ChessBase Mega Database '97, though
I note ChessBase Big Database 2002 has increased the number to about 320.

My principal aim in this work has been to make available a comprehensive collection of Fine's games played at classical time limits and present them chronologically and in context. All other miscellaneous games are provided for the sake of comprehensiveness. I have included the United States Rapid Transit Championship games within the main body of text because of the quality of the opposition in the events.

The translations are largely my own. I cannot, however, claim fluency in any language other than my native English, and therefore the translated notes are necessarily often simplified in comparison to the originals upon which they were based. Apart from English-language sources, I have made use of materials from journals, biographies, games collections and tournament books in Russian, Ukrainian, Slovenian, Slovakian, Polish, Czech, Croat, Dutch, German, Swedish, Norwegian, Spanish and French. Notes have also been edited to conform with the English algebraic form of move notation and to regularize some spellings.
Wherever possible, I have tried to use good quality notes from sources other than Lessons from My Games. In cases where there are several good sources I have made a synthesis of the available material. Occasionally a single alternative source is of outstanding quality, in which case, 1 have principally made use of that source. I have corrected minor errors without comment, but in the case of certain contested conclusions or repeated errors I have indicated what I believe to be correct. Naturally, my own suggestions require testing, though 1 have run most of them through Fritz 5.32 on an IBM machine with a Pentium chip.
​
I hope this work can serve as a basis for further research, possibly leading to a new edition to celebrate Fine's centenary. There are plenty more games to be found...