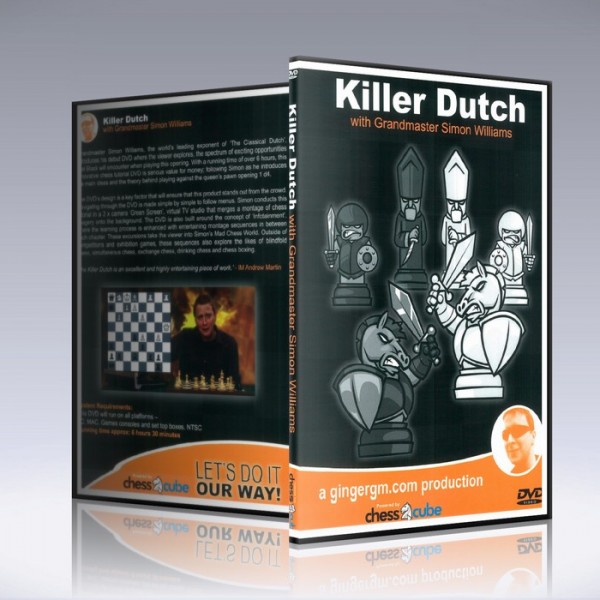 SKU:
€24.95
€24.95
Unavailable
per item
Add to Cart
The Classical Dutch is a fantastic sideline against 1. d4 that is guaranteed to catch your opponent by surprise. The main lines of the Dutch Defense include the Leningrad Dutch with an early kingside fianchetto, and the Dutch Stonewall Defense with a closed center and pawns on f5, e6, and d5 – however in the Classical Dutch black strives to rapidly challenge white for control of the center with moves like f5, e6, and later d6 and e5 – building a dynamic pawn wall that puts strong pressure on white. Grandmaster Simon Williams is the world´s leading expert on the Classical Dutch – and the British GM is certainly not shy about sharing his secrets in this premium 6+ hour DVD, explaining key victories and defeats with the Classical Dutch so the viewer understand the keys to success and how to avoid common positional and tactical pitfalls. The ¨Killer Dutch¨ is an innovative chess DVD that mixes strong educational content with highly entertaining editing to keep the viewers on their heels. You never know what to expect as the DVD switches from a traditional chess DVD format with GM Williams explaining lines at the board with a computer, to exciting scenes from chess boxing matches, simultaneous displays, and ridiculous exhibition matches with human-sized pieces. All joking aside, GM William` expertise in the Classical Dutch is unquestionable – he has published a best-selling book on the topic and does a fantastic job of incorporating this material and building on it with exciting new research. If you are looking for an exciting opening against 1. d4 that will catch your opponent by surprise and give you an immediate edge in the opening – the ¨Killer Dutch¨ chess DVD is the solution!