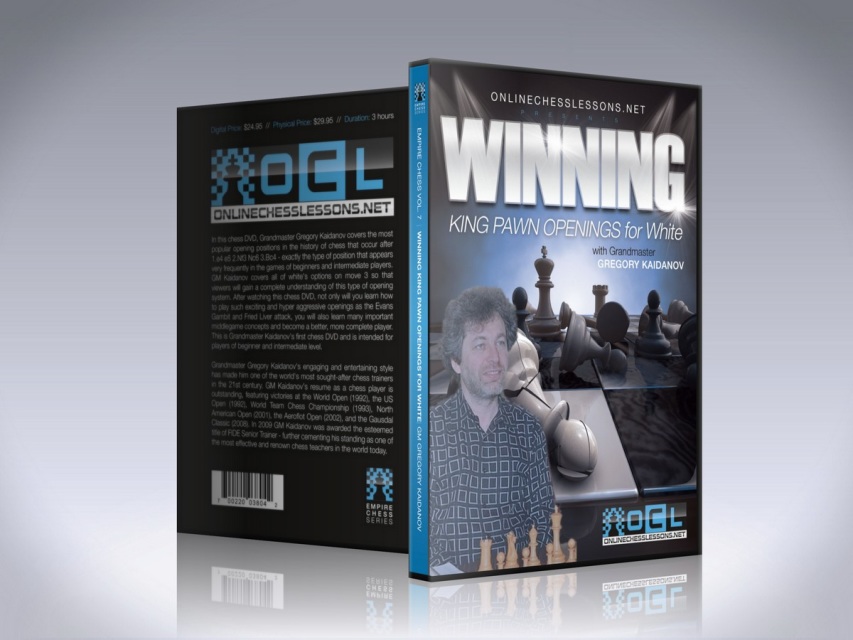 SKU:
€25.00
€25.00
Niet beschikbaar
per artikel
Uitverkocht
Aan winkelwagen toevoegen
In this chess DVD, Grandmaster Gregory Kaidanov covers the most popular opening positions in the history of chess that occur after 1.e4 e5 2.Nf3 Nc6 3.Bc4 - exactly the type of position that appears very frequently in the games of beginners and intermediate players. GM Kaidanov covers all of white's options on move 3 so that viewers will gain a complete understanding of this type of opening system. After watching this chess DVD, not only will you learn how to play such exciting and hyper aggressive openings as the Evans Gambit and Fried Liver attack, you will also learn many important middlegame concepts and become a better, more complete player. This is Grandmaster Kaidanov's first chess DVD and is intended for players of beginner and intermediate level.

About the Author
Grandmaster Gregory Kaidanov's engaging and entertaining style has made him one of the world's most sought-after chess trainers in the 21st century. GM Kaidanov achieved the IM title in 1987 and the GM title in 1988, catapulting him at an incredibly fast rate into the world's elite. GM Kaidanov's resume as a chess player is outstanding, featuring victories at the World Open (1992), the US Open (1992), World Team Chess Championship (1993), North American Open (2001), the Aeroflot Open (2002), and the Gausdal Classic (2008). In 2009 GM Kaidanov was awarded the esteemed title of FIDE Senior Trainer - further cementing his standing as one of the most effective and renown chess teachers in the world today.